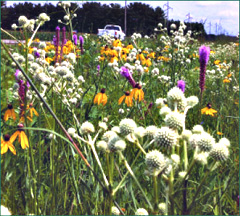 They’re experimenting with burning some grass on the campus of the University of Northern Iowa in an effort to bring power to the people.

That sounds like a 1960’s scenario, but its really the search for a 21st Century alternative to create electricity.

Joel Haack is the dean of the shool’s College of Natural Sciences, and says the research is underway at the Tallgrass Prairie Center .

Haack says they’re trying to find out the best mix of prairie plants that would be the most effective in producing energy. He says it’s a joint effort along with the Soil Tilth Lab at Iowa State, Cedar Falls Utilities, the biology lab at UNI and the Black Hawk County conservation board as they seek a new “biomass” fuel source.

Haack says they are using some common prairie grasses along with other prairie plants. He says they’ve found that the energy produced can be enhanced if some of the flowers from the plants are included, such as spiderwort and butterfly weed, plants that produce orange and purple flowers. Haack says the believe some mix of the flowers and grasses will probably be the most effective in producing energy. Haack says one benefit of the prairie plants is they wouldn’t have to take up ground that’s used for other crops.

Haack says they would use the plantings in marginal fields, and their test plots are along the Cedar River in some very poor soil conditions that provide farmers a way to use that soil. They would also provide benefits to the animals and insects who would live in the plants. Researchers did have a setback in using the marginal land along the river.

Haack says the plots were wiped out by the flooding last year, but they have been growing very well this year. He says researchers were discouraged when the plots got flooded out, thinking it would take another three years before they would get results. But he says the good growing season this has them now thinking they may be able to get a crop to test next year.

Haack says the fast growing nature of the plants is another benefit of using them, and they also can pull carbon from the air. Haack says prairie plants have roots that grow deep and work at a number of different levels. He says Iowa State is looking at the depth and where the carbon is deposited. The Iowa Power Fund Board provided the center with 612-thousand state dollars for the three-year study, and the research groups provided $136,000. The Iowa Power Fund Board visited the Tallgrass Prairie Center Wednesday to get an update on the project.