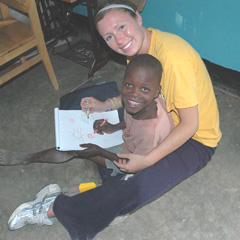 Tough economic times are forcing a Sioux City-based missionary group to push back, but not cancel, plans to build an orphanage in an impoverished African village.

"Raising the capitol funds for the orphanage is more difficult than it was two or three years ago," Bechler says. "We’re looking for donors who can make anywhere from $10,000 to 40-or-$50,000 pledges to get this orphanage built."

Despite the setbacks, a team from STEMM will be leaving for Tanzania later this month to break ground on the orphanage. Bechler says plans for the much-needed facility are being scaled back, for now.

"We were hoping to have that completed by July of this year and it’s just plain not happening and the economy has had something to do with that," she says. "We’ve got about half of the money that we need so we’re starting quite humbly with two houses and as the funds come in, we will construct more houses."

Each house will be home to about ten children and the original orphanage plan called for 18 houses to shelter 180 children. STEMM was founded in 1996 and since then, its members from Iowa, Nebraska and South Dakota have made dozens of trips to Tanzania. Bechler says it’s incredibly rewarding.

"When you walk on Tanzanian soil, the people are so appreciative," she says. "They can’t believe that people half a world away would care enough to send their child to school or do surgery on their child, or even building this orphanage. STEMM is somewhat of a household word in Tanzania." The next mission team is scheduled to depart on a three-week trip on July 22nd to break ground on the orphanage.