You are here: Home / Politics / Govt / Iowa Department for the Blind expanding outreach 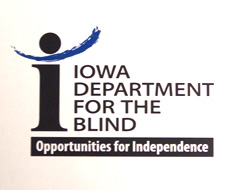 The Iowa Department for the Blind is using federal recovery funds for a new outreach program in hopes of becoming better known statewide.

Department director Karen Keninger says some 69,000 Iowans are blind or visually impaired — but many don’t know about the help that is available.

"Unfortunately, we are a well kept secret. We didn’t mean it to be that way, but the fact is, that a lot of people who live in this state don’t know that we’re out there to help their employees, and their neighbors and their friends and their family members that have vision loss problems, to help them to do the things that they need to do," Keninger says.

Keninger says the federal funding will allow them to reach out more by expanding their field staff in Des Moines, Waterloo and Cedar Rapids. She says they will hire new counselors and teachers to cover areas of the state where they have "been a little thin" the last couple of years as they dealt with budget issues.

Kenninger says the hiring process is underway and will be completed soon. Keninger also unveiled a new logo for the department. Keninger says they knew they needed a different way to express their belief in the blind people of Iowa and their ability to achieve the freedom and independence that they deserve and desire. She says they also know they needed to communicate to blind people and the rest of the state the things they need to know about the department.

Keninger says there are many success stories about blind Iowans who get training from the department and are able to get or hold jobs and be productive workers. The department says its 82% placement rate is the second in the nation for the number of blind or visually impaired people who are successfully employed.

Keninger also unveiled a new public art exhibit at the department’s office that allows blind and visually impaired people to experience the art through touch.