You are here: Home / Fires/Accidents/Disasters / Tractors toppled, trees down in storms 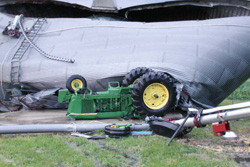 Clean-up is underway in Cedar Falls after a powerful early-morning thunderstorm left a trail of destruction and much of the city without power.

Burman says there’s major damage in a large area of the city, mainly a perimeter from the University of Northern Iowa campus east to the Cedar Falls-Waterloo boundary and north to the Cedar River, and sporadic damage in the other parts of town. 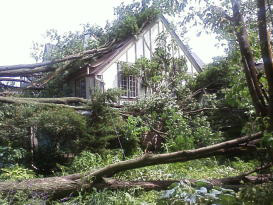 He warns residents to stay away from downed power lines and not to try to untangle tree limbs that are caught in wires. "It’s a dangerous situation," he says. The storm left more than 15,000 homes and businesses in Cedar Falls, Waterloo and outlying areas without power.

A spokesman for Cedar Falls Utilities says power was restored to about half of the company’s 7,000 affected customers by 7 A.M., while MidAmerican Energy was still reporting nearly 3,200 customers were without power at 9 A.M.

Burman says the downed trees and power lines are creating problems for motorists in Cedar Falls. He says about 40% of the roads in the impacted area are closed due to storm debris and some may not even be cleared by sundown. The National Weather Service clocked wind gusts as high as 60-miles per hour near the Waterloo Regional Airport.

An air traffic controller reported bent hangar doors and a helicopter blown into a fence. The high winds blew over at least two semis on U.S. Highway 218 — one near George Wyth State Park and the other north of Cedar Falls. Burman says one of the drivers was transported to the hospital with minor injuries after fire crews pulled him from his overturned cab.

The injured driver was having back and arm pain. Forecasters say showers and thunderstorms are expected to continue across much of the state today, before coming to an end tonight.

Strong storms dropped two inches of rain in less than an hour on Fayette County in northeast Iowa to go with heavy wind damage. The Fayette County Sheriff says the west-central part of the county was the hardest hit by strong winds. The Sheriff took 24 calls of downed trees and power lines, along with damaged buildings. An unoccupied mobile home was blown across a road and the roofs of several barns and other buildings were torn off.

A tractor flipped over near Westgate, and there was damage in the Randalia area. Several homes sustained damage and at least one garage was knocked over, and thousands of acres of crops were flattened. No one was injured.