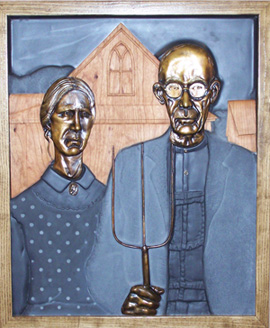 A unique new art project can now be seen — and touched — at the Iowa Department for the Blind office in downtown Des Moines.

Guards were posted around the Grant Wood painting "American Gothic" during a recent showing at the Des Moines Art Center.

People were allowed to look, but not touch the iconic piece by the Iowan.

But the creator of a new representation of "American Gothic" encourages you to put your fingers all over the work. It’s part of an art project created in the renovation of the building that houses the Iowa Department for the Blind. Artist Ann Cunningham’s work also features a contour map, a row of corn, shapes and other pieces of touchable art.

"I found out quickly that the answer was ‘no’, not the way I was doing it. But, it started me on a journey," Cunningham says. Cunningham says the journey was trying to find a way to create art that blind people could understand the same as sighted people.

Cunningham says she has not been able to get away from the idea and came to find a home at the Colorado School for the Blind where she teaches art. She says the job has allowed her to explore the different avenues of how the brain works and how to make art work tactually and visually. Cunningham says she was excited to be able to create tactile art for Iowa.

Cunningham says the Iowa exhibit is the culmination of everything she has learned through the years. "We’ve been able to identify and interpret a lot of picture conventions — like overlap, outline, demonition of size, conversion — all those things we take for granted visually, also work tactually," Cunningham says.

The 3-D art exhibit is composed of slate, bronze and wood. The exhibit is open to the public.