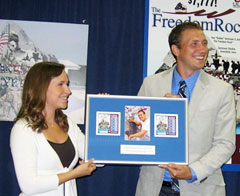 The Iowa Lottery has released a new scratch ticket that will raise money to support war veterans.

The "Freedom Rock" game features an image of the giant boulder, also dubbed The Freedom Rock, that’s located near the western Iowa town of Greenfield. For over a decade, local artist Ray "Bubba" Sorensen has painted patriotic images on the 56-ton, 25-foot high boulder.

Lottery spokesperson Mary Neubauer says they approached Sorensen about the idea nearly a year ago. "This is a way for us at the lottery to honor the work of a local artist and help veterans at the same time," Neubauer said.

The Iowa Legislature approved the production of scratch and pull-tab games to benefit veterans in 2008. The sales began just over one year ago with estimates that the games would raise between $2 and $3 million in proceeds annually for the Iowa Veterans Trust Fund . Lottery officials expect sales of the patriotic themed games will reach $2.7 million for fiscal year 2009 .

"So we’re going to be on the upper range of the scale we gave legislators when they asked us about this project," Neubauer said.

Neubauer believes the new scratch tickets will be available at all