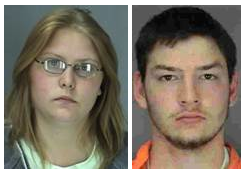 A Des Moines infant is listed in critical condition in a hospital while both his parents are in jail.

Their seven-week-old son, Ethan, is being treated for severe head injuries and broken ribs. Investigators say the injures were intentionally inflicted.

He was also treated for a broken arm last month, when he was just 23 days old.

Both parents say they don’t know how the latest injuries happened. They’re held on a $50,000 bond and if convicted, could face 50 years in prison.