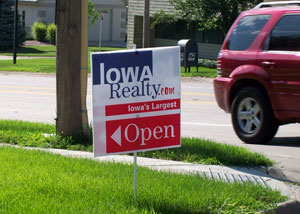 The president of the Iowa Association of Realtors says home sales in June rose 19.2 percent compared to May.

"We’ve been talking about what the $8,000 tax credit has been doing to stimulate the market and I think this does show that it is helping the market considerably," Knapp said.

The tax credit for first time homebuyers is scheduled to run through November of this year. Knapp says low interest rates, in the five percent range, have also contributed to the increase in home sales.

The average sale price of Iowa homes in June was $151,709. That’s down just 2.9 percent from June 2008. Knapp says he believes the prices are holding fairly steady, especially considering the number of homes being sold.

"Some of the markets are (saying) they’re having lower average prices because of so many foreclosed homes, but that’s not the case overall in Iowa," Knapp said. "Our average sales price is holding real steady compared to what it was in 2008."

Despite the increase in sales, Knapp says there are a lot of Iowans having trouble selling their homes in a timely manner. Homes spent an average of 106 days on the market in June, 10 days longer than the figure recorded one year ago. Knapp believes homes could begin spending fewer days on the market as more buyers enter the market this summer.