You are here: Home / Business / Five counties make pitch for a casino license

Folks from five Iowa counties who hope to land a casino in their area made a pitch to state gambling regulators today, but there were critics, too, who said current casinos would see their profits slide if new casinos open in Iowa. 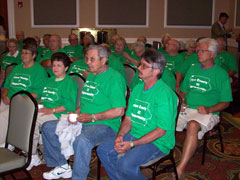 Jeff Gallagher of Larchwood is president of the Lyon County Riverboat Foundation. "This project would have a significant impact on tourism and would be by far the most relevant project proposed for the state, "Gallagher said. "…The Lyon County resort would provide an opportunity to significantly increase Iowa’s (tax) revenue from an out-of-state source." 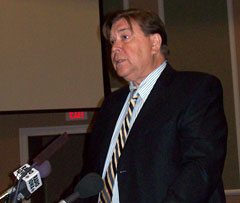 The proposed casino would lie near the Iowa/South Dakota border and would be just one mile from the Minnesota border. Sioux City Mayor Mike Hobart suggested a casino in Lyon County would create an "imbalance" in northwest Iowa and eat into the profits of the casino in Sioux City.

"We are in a depressed economy right now, especially in northwestern Iowa. Casino Omaha is currently undergoing some financial problems," Hobart said. "I believe that we are saturated in that side of the state."

Gallagher, the casino-backer from Larchwood in Lyon County, offered a rebuttal.

"When looking at the market studies, the market strength of this project is not to the south, but to the west and to the north," Gallagher said. "To the south, the closest Iowa casino is an hour and a half away." That would be the Argosy casino, in Sioux City.

Sioux City’s mayor told state regulators that if Lyon County becomes home to a new casino, South Dakota might retaliate and put one a short drive away in Sioux Falls.

"South Dakota already has casino gaming in their state," Hobart said. "It’s not a stretch of the imagination to see that they would easily be able to create competition in the Sioux Falls area."

Debi Durham, president of the Siouxland Chamber of Commerce, argued a new casino in northwest Iowa would "saturate" the market and depress profits for the Argosy-owned casino in Sioux City.

"There’s been an attempt to minimize or even downplay the impact," Durham said. "…What clearly cannot be denied is there will be an impact, an adverse impact, to Argosy, Sioux City, Woodbury County…At a time when balancing governmental budgets is challenging enough, further reduction in revenues will most likely lead to either a decrease in services and/or higher taxes."

Other casino backers got to speak during a public comment period at this morning’s Racing and Gaming Commission meeting. Karen Mitchell represents Franklin County Development Association which lobbied back in 2004 for a license to open a casino near the Dows exit along Interstate-35.

"Franklin County has been waiting patiently a very long time for this opportunity and this opportunity is needed now more than ever," Mitchell said. "We have had two plant closings…We have had severe contractions in other manufacturing industries, so we need these jobs."

"As you can see from the people we have here today, Webster County is all in for gaming," Lutz said. 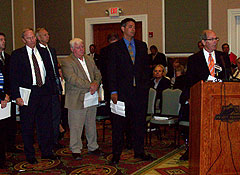 Don Woodruff is chairman of the Development Corporation of Fort Dodge and Webster County.

"We cannot hope to compete for degreed individuals that we so desperately need to work and manage our new economy without improvements in entertainment and dining," Woodruff said. "For these very reasons we support the additional license (for Fort Dodge) as we feel, if done properly, it will provide us with good restaurants and entertainment beyond just gambling."

Ottumwa Mayor Dale Uehling was the last in the group of potential casino applicants to address the commission this morning.

"Ottumwa and Wapello County are still very much interested in a casino license," Uehling said, "and we think that there are some things that make us a prime candidate. We think we fit the criteria."

A representative of Tama County also addressed the Racing and Gaming Commission, asking for "an opportunity to tell (their) story" this fall when regulators consider new license applications.

The five-member Racing and Gaming Commission this morning set October 1st as the deadline for counties to submit casino applications.

Click on the audio link below to listen to all of those who spoke during the "public comment" period at this morning’s Racing and Gaming Commission meeting.