You are here: Home / Education / Team Archaeology to teach history while riding RAGBRAI 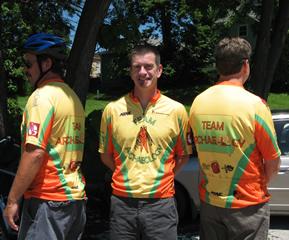 As thousands of bicyclists challenge their bodies with the statewide bike ride starting this weekend, they’ll also be able to expand their brains and learn about Iowa’s distant past. Lynn Alex, at the state archaeologist’s office, says members of Team Archaeology will also be pedaling along the entire 472-mile ride, talking to other riders and folks in the dozens of communities about the amazing sites nearby.

"We’re telling them about archaeology and early history in Iowa," Alex says. "We’re passing out wrist bands that have our website on it. We’re having outreach exhibits in five different locations across the state during the week, generally, getting the word out about Iowa archaeology."

RAGBRAI, the Register’s Annual Great Bike Ride Across Iowa, begins on Sunday morning in the southwest Iowa city of Council Bluffs. Alex says there are some incredible historic sites in that area of the Loess Hills — and the hills themselves were created by glaciers tens of thousands of years ago.

"One of the things we’ll be telling people about are some 900-year-old earth lodge village sites that Native American people created," Alex says. "There are over 300 examples of those sites, particularly in Mills County, Iowa." In addition to the team of archaeologists riding on RAGBRAI, she says she and several other staff members will be setting up exhibits in about a half-dozen of the communities where the 15-thousand bikers will be overnighting.

"We’re going to have a collection of very early Native American artifacts that were discovered in the 1960s," Alex says. "More recently, Dr. Matt Hill at Iowa State University, has taken a look at this collection and identified them as Ice Age artifacts and that is a pretty exciting discovery for Iowa." Some of those items, like stone tools, were found in Warren County and may be 11-thousand years old. Bones and teeth of mammoths and mastodons have been found in all 99 Iowa counties.

Outreach exhibits will be set up in Henderson, Milo, Moravia, Packwood and at the end of the ride next weekend in Burlington. For more information, visit www.iowaarchaeology.org .