You are here: Home / Recreation / Entertainment / Actress returns to Iowa for movie premiere

A Hollywood actress who grew up in northern Iowa brought her latest film home for its Midwestern premiere tonight. Tanna Frederick, a 1995 Mason City High School graduate, is co-founder of the Iowa Independent Film Festival, underway in Clear Lake. 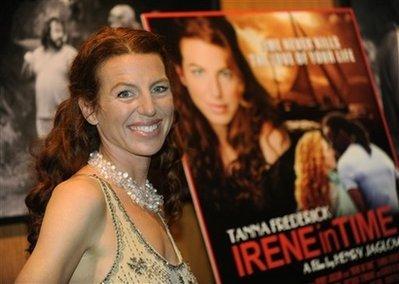 Frederick says she wanted to start the festival and bring films like hers back to the area due to her hometown’s emphasis on fine arts. "It’s because of this community and because of the people here who are open-minded and excited to support art," Frederick says. "I just have always felt so confident and so loved and have been given such a great, fertile hometown to grow in. When I went out to Los Angeles, I had that as my coat of armor and that kept me through so many rough times in Hollywood."

Frederick’s new film, "Irene in Time," will be shown as part of the festival tonight. She says despite great "mind-blowing" reviews in Hollywood, she really wants to bring it back to north-central Iowa to share it with her family and friends.

The movie is about the complex relationships between fathers and daughters and the potential lifelong consequences of those relationships. It follows the story of Irene, a woman who has trouble finding the right man. The character’s father was something of a hustler and gambler who died when she was 13. Irene has a sort of "daddy complex," Frederick says, and the movie deals with how women’s relationships with their fathers affects their choices in men throughout their lives.

"Irene in Time" kicks off the Iowa Independent Film Festival with a showing at 5 o’clock tonight at the Lake Theater in Clear Lake. The festival runs all weekend. Learn more at www.iowaindie.org .