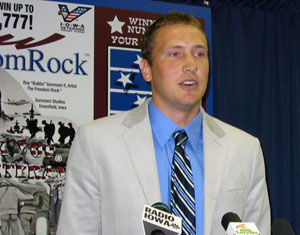 An artist from Greenfield is about to gain more recognition thanks to the Iowa Lottery and veterans groups. The lottery released a new scratch game this week called The Freedom Rock. The ticket features an image of a large boulder located in the western Iowa town of Greenfield that Ray "Bubba" Sorensen has painted with patriotic images since 1999.

The 29-year-old Sorenson says he was inspired to paint on the then graffiti covered rock after seeing the movie "Saving Private Ryan." "I painted ‘thank you veterans for our freedom’ and (a depiction of) the flag raising at Iwo Jima," Sorenson explained at an Iowa Lottery press conference. "I thought that would kind of be it…it would get painted over and it did. But, local veterans asked, ‘hey, would you paint that again for Memorial Day? We really liked that.’" Sorensen agreed, but took it a step further and painted all the way around the 56-ton, 25-foot high boulder now called The Freedom Rock.

Veterans from across the country stop in Greenfield on a regular basis to look at the rock. In May of 2006, a group of motorcycle riding vets – traveling from California to Washington D.C. – stopped to ask Sorensen for a favor. They wanted to sprinkle the ashes of some Vietnam War vets who recently passed away around the boulder. "In May, out at the rock, there’s usually 30 to 40 mile per hour sustained winds and I said ‘the ashes are just going to blow away, so why don’t you dump (the ashes) in the paint can and I’ll paint ’em right on the rock and they’ll be here forever,’" Sorensen said. "So, that day I added seven Vietnam veterans." The veterans’ ashes are part of a helicopter Sorensen painted on the rock. "I’ve continued to add veterans every year and the total is up to 16 different Vietnam veterans’ ashes painted into that helicopter," Sorensen said.