You are here: Home / Recreation / Entertainment / Oelwein residents meet author who wrote about their meth problems 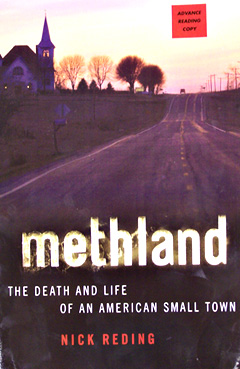 A larger than expected crowd turned out in the northeast Iowa town of Oelwein last night (Monday) to meet the author of a book that chronicled the meth epidemic in the town.

Some 150 people came to the Oelwein library to talk with Nick Reding author of "Methland: The Death And Life Of An American Small Town."

Local prosecutor Nathen Lien is featured prominently in the book and was asked about the depiction of the town.

Lien says the meth situation was described "fairly accurately" compared to what he dealt with, and says Reding was able to bring the meth situation full circle. Oelwein librarian Susan Macken gives the book an overall good rating.

"There are some things in there that I did find are inaccurate that I knew, and I guess you have to kind of think of the overall picture too, what was the story he was trying to tell — there was a meth problem and the town tried to remedy it and did," Macken says. She says it is "a positive book" in the end.

Macken says they had one book to start and ordered three more, and now have a waiting list for people wanting to read it.  Former librarian, Vivian Petrick Koloc, did read the entire book.

"I thought the book was very candid, probably a little bleak at the beginning, but the ending, the author did recognize that Oelwein has really gone a long way and continuing to go a long way," she says. Doctor Clay Hallberg was also featured in the book and says the community reaction to Reding was mostly positive despite the issues the book covered.

Hallberg says there were a lot of things in the book that were "to say the least dicey." But he says it’s just like anything else in the world, that "until you get out of the stages of denial and admit that there’s a problem, nothing gets done." Hallberg says the community is lucky that the people that are leaders have their hearts "mostly in the right places" when it comes to discussing the problem.

Reding talked with the local radio station KOEL, and says he was aware that the book might raise some concerns. Reding says as soon as he got the first copies of the book, he sent them to those he wrote about. "And I was certainly very nervous to hear back from them… but they were very supportive of what was in that book."

Reding says most people understand that he Oelwein was used to illustrate a bigger picture. Reding says he didn’t pick Oelwein because the city has the worst meth problem in the world. And he says the book covers up to 2005 and doesn’t update with the changes made in Oelwein to deal with the meth problem.

Reding says you could take a dart and throw it at the map and find communities across the country that had similar meth problems. Reding stopped in Oelwein as part of a tour to promote the book. He will be in Iowa City Wednesday (July 22) and Cedar Rapids on Thursday.

The book is published by Bloomsbury USA and can be ordered from their website here .