You are here: Home / Politics / Govt / Roberts declares himself "official" candidate for governor 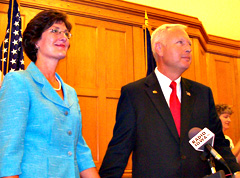 A fifth Republican has filed the required paperwork and started raising money for a campaign for governor.

Rod Roberts, a state representative from Carroll, made his aspirations "official" late this morning during a news conference in Des Moines.

"I want to serve the people of Iowa as their next governor," Roberts said.

Roberts, an ordained minister who is now development director for Christian Churches in Iowa, got a few "Amens" from the crowd of about 150 who gathered into a statehouse conference room to hear his "announcement" speech.

"I have spoken with countless Iowans who have told me that Iowa needs a change in direction and a change in leadership," Roberts said.

Roberts, who is 51 years old, ran for the legislature in 1998 and lost, but then ran again in 2000 and won. After nine years in the legislature, Roberts presents himself as a "new" kind of voice to face-off against Democrat Governor Chet Culver in 2010.

Roberts describes himself as a friendly and approachable, and suggests he is a "fresh face" compared to other Republicans who are running, like Bob Vander Plaats, who ran for governor in 2002 and 2006 and is running a third time.

Christian Fong, a Republican from Cedar Rapids, says he is "definitely" a candidate for governor as well and he’s formed an "exploratory committee" to raise campaign cash. Bob Vander Plaats and Christopher Rants, both of Sioux City, have been actively campaigning for the past few months and raises money as well.

Two other Republican legislators have indicated they are contemplating a bid for governor, but only one of them – Senator Paul McKinley of Chariton — has taken the step of forming an exploratory committee in order to raise money for a race.

Iowa Democratic Party chairman Michael Kiernan is dismissive of the G.O.P. field. "From the Democratic Party’s perspective, we’re one short of the seven dwarfs," Kiernan says.

Kiernan says Roberts is not well-known outside of the Carroll area and hasn’t been a high-profile legislator. "I think that his own constituents are going to conclude that making this race is really a stretch for him," Kiernan says. "And while nobody doubts his committment to his Christian faith, when it comes to this race and ideas for moving this state forward, frankly all he has to offer is a prayer."

Click on the audio link below to hear what Roberts said this morning at the statehouse.