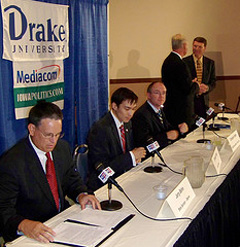 The specter of the longest-serving Iowa governor was raised at an afternoon forum featuring five Republicans who say they intend to run for governor in 2010.

The five likely G.O.P. candidates were asked what they thought of former Iowa Governor Terry Branstad running for governor again.

Branstad left office in January, 1999, after 16 years as governor. Branstad’s currently president of Des Moines University, but when asked recently whether he might run in 2010, Branstad said "you never say never in politics."

Rod Roberts of Carroll said he’d welcome Branstad to the campaign  conversation. "I think a full field of candidates provides for a spirited primary and an opportunity for Iowans to hear a variety of points of view and perspectives on issues," Roberts said.

When it was time for Bob Vander Plaats of Sioux City to answer the question, he talked in general about his vision for the state rather than about Branstad. "Obviously, I don’t make other people’s decisions," Vander Plaats said. "What I can tell you is that my name will be on the ballot June 8, 2010."

The next candidate in line was Jerry Behn of Boone. "Bottom line is, this race is against Governor Culver," Behn said, "and which ever anyone of us gentlemen it is (the GOP nominee), I think we’ll be better off with any of us."

If elected, Christian Fong of Cedar Rapids would be Iowa’s youngest governor — taking the title away from Branstad who was elected in 1982 — when he was 35. Fong, who is 32 today, didn’t seem in a retro mood.

"Governor Branstad, I would invite you to make your decision very soon," Fong said. "This race is about looking forward."

Christopher Rants of Sioux City said the word "future" six times when addressing the idea of a Branstad candidacy. "If he wants to come in, fine," Rants said. "But let’s start talking about the future of the state."

Click on the audio link below to hear the question from Lynn Campbell of IowaPolitics.com followed by the answers from the five candidates.