You are here: Home / Politics / Govt / Governor says money is on the way from I-Jobs program 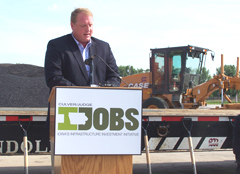 Governor Chet Culver announced today that checks will be in the mail soon to help cities and counties across the state finance road and bridge projects.

The roughly $100 million in funding comes from Culver’s $830 million I-JOBS initiative approved by lawmakers this year.

Culver says $601-million in proceeds from a sale of I-JOBS bonds were released to the state on Wednesday. "So, we have the money and that money will start going out across this state on Tuesday," Culver said at a press conference staged at the Des Moines Public Works yard.

The bonds that were sold to investors will be paid back over the next two decades using revenue from state-licensed casinos.

Culver says Iowa received a better-than-expected interest rate. He says state officials anticipated paying a 4.5% interest rate, but instead received a rate of 4.3%. "That means a cost savings to Iowa taxpayers, over the 20-year period, of about 250-million dollars," Culver said.

Around $50-million of the I-JOBS funding will be used to improve 55 bridges located in 29 counties. Iowa Department of Transportation Director Nancy Richardson says Iowa has around 25,000 bridges. She says nearly one-quarter of Iowa’s bridges are classified as "structurally deficient" or "functionally obsolete."

Waterloo Mayor Tim Hurley, who also serves as president of the Iowa League of Cities, says the infusion of I-JOBS money will help local governments improve roads and encourage economic development. "With the current economic downturn and the budget shortfalls cities and counties in Iowa now face, it is more critical than ever that we fund our public roadways," Hurley said.

"This funding through the I-JOBS program really enables those operations to continue to take place," Peterson said. "Counties across the state are really struggling to make sure those (rural) roads are in good shape." The I-JOBS website list the projected funds being distributed to each city and county.

Some small towns are receiving only a few hundred dollars. For instance, the Franklin County town of Hansell – which has 96 residents – is receiving $430. Richardson says many of those small communities can use the money to shore up gravel roads. "To put another layer of rock on those roads, to help them better weather – no pun intended – the weather this next winter, is worth a lot," Richardson said.

"I think we just have to remember that not every (city) has a budget the size of Des Moines or Waterloo and to these small cities, a few hundred dollars or a thousand dollars means a lot." Iowa has around 114,000 miles of roads. Richardson says roughly 80,000 miles are unpaved or non-hard surface roads.