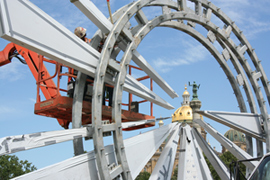 A new sculpture on the capitol complex in Des Moines west of the judicial building will highlight an early legal decision in the state.

Robert Bailey of the Iowa Department of Administrative Services describes the sculpture.

Bailey says it tells the story of a former slave named Ralph Montgomery who had negotiated for his freedom from a man in Missouri by promising to pay the man $550.

Montgomery traveled to Dubuque to work in the lead mines near Dubuque, but after two years, failed to earn the money and two bounty hunters came to take him back to Missouri. A local farmer stopped them and took them to local magistrate, Thomas Wilson. Wilson also served on the three-judge territorial Supreme Court, which decided to hear the case. The court ruled in Montgomery’s favor.