You are here: Home / Outdoors / Iowa ranked #2 in wind energy 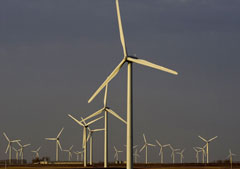 Texas is the nation’s wind powerhouse, but Iowa is now number-two in wind energy, surpassing California and Minnesota.

“Iowa is one of the big success stories for the wind industry of the past few years,” Belyeu says. “Iowa has been a strong player since the early 80s but has jockeyed back and forth with Minnesota for really the third and fourth place for a while. In the last year however, (Iowa) came on strong and is in second-place in terms of wind generation in the country.”

Texas has a wind generating capacity of 8,300 megawatts, well ahead of Iowa’s capacity at just over three-thousand megawatts, yet Belyeu says that’s a remarkable quantity.

One megawatt of wind can supply 250 to 300 average homes so Iowa’s total around 3,000 megawatts can supply enough power for around 800,000 homes. Number-three California now trails Iowa with around 28-hundred megawatts of wind power capacity. Minnesota ranks fourth, Washington is fifth. Belyeu says wind farms keep growing in Iowa, with the latest being an 80-turbine project coming online in Worth County.

Belyeu says, “Iowa added 160-megawatts just in the last quarter, and in the past year, nearly doubled its capacity because the fourth quarter of 2008 was very strong for Iowa.” Texas is the continental United States’ largest state while Iowa is about average in its size, so she notes it’s particularly stunning that Iowa’s become so dominant in the wind industry.

“Iowa has had strong state policies that promote wind power since the early 80s,” Belyeu says. “Iowa was one of the first states that had a renewable electricity standard and it also has some tax abatements and some other programs that attract not only the projects themselves but also the manufacturers to Iowa.” Learn more at the American Wind Energy Association website .