You are here: Home / News / NASCAR driver talks about dangers of distracted driving 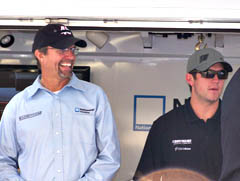 Petty says when Nationwide started its driving while distracted program, it was targeted at high school kids. But he says recent studies on truck drivers, and bus drivers and recent accidents with commuter trains have shown the need for an expanded message.

"This is an important message to get out,I don’t care if you’re driving a bobcat or a lawnmower around your yard, you need to pay attention. That’s how simple it is," Petty says.

Petty was joined by Des Moines native Michael Annett and Brad Keselowski who both will drive in the Nationwide NASCAR race at Newton Saturday. He says it’s important to have the younger race car drivers talking about distracted driving too.

Petty says a big deal is made of the "Swine Flu" epidemic, but he says distracted driving is an epidemic too, and it’s important to have younger drivers to talk to teens about distracted driving, as it has a huge impact on the teens.

Petty says professional racing is totally different from everyday driving which should be "defensive" driving — while professional racers have to drive offensively. "We have to make things happen, that’s why you see guys running so close together and some of the things that happen on the racetrack, is because of being overly aggressive. On the highway you have to be incredibly passive, you have to be the other way. You need to pay attention," Petty says.

He says on the road you have to be aware if a person is going to step onto the road, if kid on a bike is going to pull out, or if someone ahead of you is going to stop. Petty says if you are tuning the radio, talking on your phone, or texting, you can have that full attention.

"If you’ve looked down for a second to type ‘hi how are you?,’ and you look up and the car stopped in front of you, then what do you do? Then it causes a chain reaction," Petty says.

Petty says the issue hit home personally with him last year when a woman talking on a cellphone pulled out and hit and killed one of his friends who was riding a motorcycle.