You are here: Home / Agriculture / Prairie area near Jefferson designated as state preserve 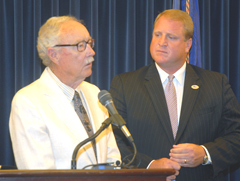 The governor has designated 30 acres of privately-owned land in Greene County as a state preserve.

A brief ceremony was held in the governor’s office earlier today to sign and notarize the documents which declare the tract of land the Perkins Prairie State Preserve.

Carroll T. Perkins of Jefferson has owned the land since the 1960s. "This is the only piece of property that I’m aware of in this part of the state that has the characteristics that it has, that it is a natural prairie," Perkins says. "I’m doing it because I love it, I admire it and I want it to remain for people that come long after me."

Perkins has created a trust to finance maintainence of the area, which is located southwest of Jefferson. The act of designating it as a state preserve extends certain legal protections over the property which, for example, prevent the construction of buildings on the 30 acre preserve.

"I would like to have the students in the area be able to experience the prairie, to be able to come in and walk in this tall grass that’s native (to Iowa)," Perkins says. "When it’s truly native, it’s over my head and it’s wonderful to go through."

Perkins and his son-in-law have restored the area to its native state. "This is something I’ve worked on for at least 20 years," Perkins says. "In the beginning there were a lot of invasive species, trees and a lot of shrubs that needed to be removed. Most of that’s been done."

Iowa Department of Natural Resources director Rich Leopold says it’s not very often the state gets to dedicate ground as a preserve. "Perkins Prairie is our newest state preserve and only one of a few that are privately owned," Leopold says.