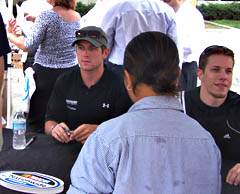 Des Moines native Michael Annett is back in Iowa preparing to race in the Nationwide Series U.S. Cellular 250 this Saturday at the Iowa Speedway in Newton.

Annett appeared at an event in Des Moines Wednesday where he talked about the dangers of distracted driving and then signed autographs.

He spoke with Radio Iowa as he signed autographs, and said he is happy to get a chance to race in his home state. Annett says it’s a “huge deal” and he circled the race on his schedule when he heard that there would be a race in Newton. He says it’s pretty incredible the Iowa Speedway is already hosting a Nationwide race after only being in existence for such a short time.

“And the fact that I’m going to be a part of it is pretty special.” Annett says growing up he expected a race in Iowa would be on a dirt track, not asphalt. Annett says, “It definitely was a dream, but growing up you always pictured yourself racing down at Knoxville, or in Oskaloosa, so the fact that we were able to get a premiere racing facility is pretty cool, and the fact that your track is a Nationwide race is pretty unbelievable.”

Annett is 22-years-old and says he likes his chances in Saturday’s race. He says their cars have taken a turn for the better this summer and despite some bad luck, have been running well lately, and he’s excited to get out on the track. Annett says he’s heard a lot of good things about the Iowa Speedway. 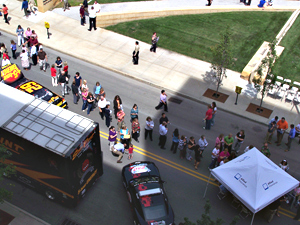 Annett says anyone who has been to the track says good things about it, and says designer Rusty Wallace designed it as a track he’like to race on. He says it mimics the Richmond track for short racing, but also is like the Chicago and Kansas tracks, so you have the best of both worlds.

Annett says the afternoon race will make for a lot of slipping and sliding a good race. Annett now lives in North Carolina.

Iowa Speedway president Jerry Jauron says there were 200 regular tickets left as of Wednesday morning for Saturday’s race, but he expects them to sell quickly. Jauron says once all the regular tickets sell, they will sell standing room only tickets, but cautions those might not last long either.

Jauron says he wants to caution fans that the standing room tickets will be limited as the standing room area used for the Indy 250 race is now covered with grandstands. The race is set to start at 3:30 Saturday.