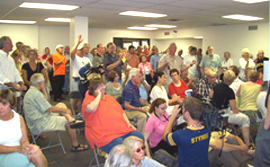 Harkin’s entry into the room was a clue to the hour ahead. About half the people in the room clapped and cheered; the rest stood or sat silently.

Harkin, a Democrat, started by talking about what he called the "scare tactics, misinformation and obstruction" from opponents of health care reform.

"There was a nationally-coordinated meeting to interrupt meetings and stuff like that. I don’t expect that to happen here," Harkin said. "We’re Iowans. We don’t do that kind of stuff, but I saw it on television." Harkin’s supporters in the crowd applauded.

Seconds later, Harkin was interrupted by John Kurr of Windsor Heights, an opponent of health care reform, and the shouting started. An elderly man got up, walked over to Kurr and pointed at him: "Why don’t you go home?" 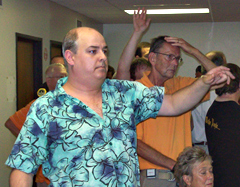 Harkin asked the elderly man who’d confronted Kurr to sit down, then Harkin restated his assertion about powerful special interests. "As I said, there is a nationally-coordinated effort to disrupt these meetings," Harkin said.

After Kurr’s outburst ended, another man on the opposite side of the room suggested the health care reform plan Harkin advocates is similar to plans drawn up by the Nazis.

"I’ve read that bill. I don’t know that you have and let me tell you something. It reads like something that was brought up in the early 1930s in Germany," the man yelled, gesturing so wildly he hit the woman sitting in front of him.

His comment caused the crowd to erupt, with one side applauding, the other yelling. Harkin made an appeal for calm, asking the crowd to act in a "civilized manner," then he opened the forum up for questions. Over the next 45 minutes, Harkin made six other appeals for civility and he even quieted his own partisans when they tried to drown out the comments of a health care reform opponent.

"Would you let her ask her question, please? Harkin said. "I beg of you, let’s be generous and kind to one another. She has a legitimate question and I will try to answer it as best I can."

The woman, Heather Stenzil of Earlham, told Harkin many opponents of health care reform fear the so-called "public" option that calls for creation of a government plan which would compete with private insurance.

"I think a lot of people agree that capitalism is the best way to regulate insurance companies," Stanzil said.

After the cheers of like-minded people in the room died down, Harkin started his response: "Well, I guess I’d only respond by saying that capitalism, whatever it means in that broad context…"

Harkin was interrupted again by jeers. One man yelled: "You don’t know what it means?" Another accused Harkin of being a "socialist/communist."

Harkin continued with his sentence: "If it is the best way to regulate, then why do we spend more than any other country in the world and why are we 37th in terms of our health status?"

"Stop treating us like we’re children!" Clifford yelled and the crowd again erupted. "…What do you think we are, stupid?"

After the event, Clifford spoke with reporters: "I think sometimes the crowd got a little out of hand which is understandable, you know…I don’t think that the debate is as honest as it should be and I heard all kinds of comments about policy and that’s why my comment was about freedom ’cause, to me, that’s the central issue. (Does) the government get to decide all this stuff for us or do we get to decide this stuff for us?"

Only one of the people Harkin called upon during the forum shared Harkin’s view that the time for health care reform has come. Denise Gross is a nurse from West Des Moines.

"Our health costs are still high. Our premiums are going up," Gross said, turning her back to Harkin to face the rest of the audience. "I would like to ask these people: what solution do you have?"

The audience divide was evident. Some applauded, others reacted angrily and shouted back at Gross.

A security guard stood near the center of the room throughout the forum and when tempers flared about 15 minutes into the event, two uniformed Des Moines policemen arrived, but there were no arrests. The cops did escort Harkin out of the room at the conclusion of the event. Harkin told reporters just before the forum started that public displays of emotion are fine with him.

"I think people ought to express themselves — this is a democracy, after all," Harkin said. "As long as it’s done in a civil manner and people are asking legitimate questions, I don’t have any problem with that at all."

Click on the audio link below to listen to the entire, hour-long event.