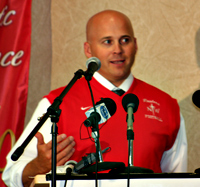 The transition to head coach at Northwestern College has been a smooth one for Kyle Achterhoff.

A former player at the school, Achterhoff spent the last decade on the staff of former coach Orv Otten.

He takes over a program that has endured only two losing seasons since 1968 and he is only the third head coach the program has had during that span.

Achteroff says they are going to do a lot of the same things that have been a part of Northwestern football for a long time, and they plan on continuing that tradition. The pieces appear to be in place for another banner season. A number of experienced players are back from last year’s team that finished with a record of 7-3 and was ranked 18th nationally.

They have 15 returning starters, with 7 on defense, which he says has been a strength of their team. Six starters are back for an offense that will feature a new quarterback this season. Jayme Rozeboom from West Lyon will be the starter. Rozeboom is a sophomore and the son of a coach that Achteroff says he can make plays with his arm and feet as well.

Despite a glossy record the past two years the Red Raiders have missed out on a spot in the NAIA national playoffs. Achterhoff hopes an emphasis on special teams play will help them get over the hump. Achteroff says the need more consistency offensively, as they would play well one game and then would struggle the next game.

Despite the tradition and the return of 15 starters Northwestern was picked to finish sixth in the pre-season Great Plains Athletic Conference poll. He says a new coach and uncertainty at the quarterback position makes it somewhat understandable, but he says they will take it as a challenge. The Red Raiders open the season at home September fifth against Dordt College.