You are here: Home / Business / Boswell may not vote for health care reform 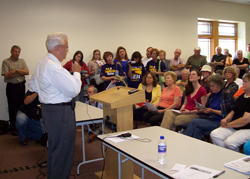 Congressman Leonard Boswell, a Democrat from Des Moines, says there’s a chance he may not vote for health care reform.

Boswell held a town hall meeting in Sigourney this afternoon and a man from Norwalk asked him whether he would vote “yes” or “no” on the health care reform plans which have cleared three House committees.

“I can’t answer that because we don’t have a bill,” Boswell said.

Some in the audience expressed their disbelief and Boswell said: “No, no, no, no, no, no, no” to quiet the crowd. Then, Boswell continued: “We’ve got three drafts and they’ve got to be melded together…and when that’s done, then you ask me a question and I’ll give you your answer.”

The man in the crowd then asked Boswell: “Will you read it?” Boswell replied: “Absolutely, well, I’ve been working on it since the 14th of July.”

Boswell is considered part of the conservative “Blue Dog Democrats” who hold sway in this debate, as their support is key if health care reform is to pass the House. 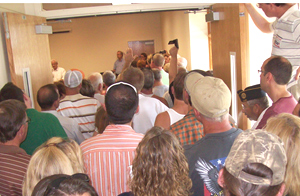 And it hasn’t happened yet and we haven’t seen the final (bill) and you know it’s very likely, it’s very possible — I’m not going to say ‘likely’ because I want this to move forward — it’s very possible it could be something I can’t vote for,” Boswell told the crowd in Sigourney.

“But we have got several places, miles to go yet and the process is going on. I think it’s something we ought to do because if you want coverage that you can’t afford or see people what is happening to our economy, if we do nothing and stay where we’re at, it’s just simply not working.”

A woman told Boswell she works in a small business that can’t afford to provide her the benefit of health care coverage and she hasn’t been able to buy insurance herself for four years because of a preexisting condition.

“I am absolutely the poster child for why we need a public option and I’d encourage you, congressman, and all your compatriots to support this ’cause I need health care,” she said.

About half the audience applauded, then Boswell told the crowd: “I think we’re going to have to have a public option.” At this point, the room erupted in both applause and shouts of “No!” Boswell told the crowd such outbursts reduced the amount of time for questions and answers. The noise quickly subsided and he moved on to the next question.

A man from Toledo told Boswell there is no constitutional right to health care, and the government is overstepping its bounds.

“We cannot talk about health care until we talk about the role of the federal government. Any politician in D.C., it seems like there’s no failed government program, just underfunded,” the man said. “But you guys are out of our money.”

Boswell’s staff initially tried to limit the number of people at the event, but over 120 people eventually crowded into a small, air conditioned meeting room in Sigourney’s library and spilled out into the hall outside. Boswell asked the crowd to “be respectful” and at a few other points in the hour-long forum Boswell interrupted, telling the crowd he wanted a “dialogue.” Boswell promised he’d go back to Washington and seek “adjustments” in the health care plan.

“So I think it’s appropriate that we go through the exercise we’re going through and see what we can do and I don’t know what’s going to come out at the end. I really don’t. I know it’s a serious matter because of your presence here; I knew it without your presence here, so let’s work at it and work at it very hard and see what we can come up with,” Boswell said. “That’s what the process is all about, so thank you for your comments very much.”

You can listen to the entire hour by clicking on the audio link below.