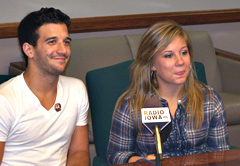 Olympic gold medal gymnast Shawn Johnson was on hand for the opening of the Iowa State Fair this morning.

Johnson was the grand marshal of the state fair parade Wednesday, and this morning brought along her "Dancing with the Stars" partner Mark Ballas.

"This event is really special to me, it’s the Iowa State Fair, and I’ve come here every year since I was pretty much, born, except the last four years I haven’t been able to because I’ve been competing, so it’s really cool to be back," Johnson says.

She says it was "really cool" to be the grand marshal of the parade and she even got a brick of her own at the agricultural building. "It’s crazy," Johnson says.

Ballas sang and he and Johnson appeared this morning at the grandstand. Johnson says she’s proud to bring Ballas to Iowa. She says she moved to Los Angeles for four months while doing the dancing show and got to get a sense of what the L.A. lifestyle was like and now Ballas can see the Iowa lifestyle and the hometown support she’s gotten. Johnson and Ballas were asked if they had a dance schedule.

Ballas says there isn’t a dance scheduled, but he says they talked about doing a dance on the stage. Johnson said this morning on the stage they thought about doing the cha-cha. "It’ be fun," Johnson added and said they could just dance down the street of the fair. Ballas will sing at the fair later. He says he’s been impressed with the reception Johnson has gotten.

"Just everyone is just so supportive of Shawn, it’s really beautiful to see, just to see a town who is really supportive of someone, you know who was….amazing at the Olympics and amazing at Dances with the Stars, " Ballas says. Ballas says he’s know about Iowa for a long time because one of his favorite bands, Slipknot, is from Iowa. Johnson says she has some old favorite things she wants to do at the fair.

Johnson says she’s a kid and loves the rides, especially the maze ride where you can walk through it and the floors move. Johnson says the food at the fair is also unbelievable with "fried everything." People were let into the fair for free today from 5 to 7 A.M. if they brought a donation of two cans of food for the Food Bank of Iowa.