You are here: Home / Business / Boswell says Obama willing to be one-term president 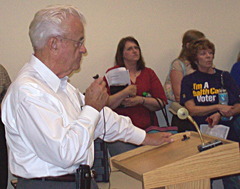 Congressman Leonard Boswell, a Democrat from Des Moines, is drawing national attention today for comments he made to three reporters yesterday in Sigourney.

According to Boswell, President Obama is willing to be a one-term president if that’s what it takes to get health care reform and a new, national energy policy.

Boswell told reporters Obama made the "one-term" comment during a February meeting with Boswell and other so-called "Blue Dog" Democrats.

"We talked about some of these things, you know, whether it’s energy or health care or whatever," Boswell said. "The president (said), ‘I’m not going to kick the can down the road.’ And he said that and I said, ‘Well, that’s something I’m kind of used to from southern Iowa, you know. I know about kicking the can down the road.’ And he said, ‘No, if it makes me a one-term president, I’m going to, we’re going to take it on because the country is in need of us taking this on.’ I respected that very much."

"We don’t have a final bill, so how could I possibly know how I’m going to vote until I see a final bill," Boswell said in response to a reporter’s question. "Come on."

But Boswell isn’t saying he’ll vote "no" on a bill, either.

"We’ve got to make our effort and I’d rather fail trying than just fail, or just stand by," Boswell said.