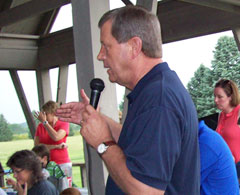 Congressman Tom Latham says President Obama and Democrats in congress are pursuing an "outrageous" agenda that will backfire in November of 2010.

"I think we’re going to have a 1994 election all over again next year," Latham said Saturday during a Dallas County Republican Party picnic.

Latham, a Republican from Ames, was first elected to congress in 1994, the year Republicans made huge gains and took control of the U.S. House.  According to Latham, Americans today aren’t just upset about health care reform, they’re worried about the Democrats’ energy plan as well as the national debt.

"People are scared to death and they should be," Latham said,  "and that’s why, I think, Americans are standing up."

Latham applauded those who’re crowding into town hall meetings and voicing their concerns.

"The American people are the backstop on all this…I can see a tremendous change and it’s been coming on now for months and months," Latham said. "…This is not something new. The tea parties, the people turning out for town hall meetings — they really care; they’re involved; they get it and they understand that we’ve got to stop what’s going on today."

Latham hasn’t held "town hall" meetings yet this month;  his first town hall meeting of the August recess is scheduled tomorrow in Indianola.