You are here: Home / Health / Medicine / Pharmacy Board hears from proponents of medical marijuana 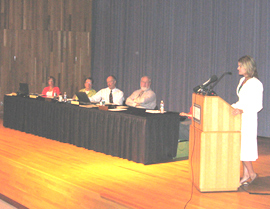 State regulators today heard from dozens of people who believe medical marijuana use should be legalized in Iowa.

The testimony in Des Moines was part of the first of four public hearings planned around the state by the Iowa Board of Pharmacy.

Dr. Joe McSherry, a neurologist from Burlington, Vermont, told the board that marijuana is less habit-forming than other drugs.

He claims less than 10% of marijuana users end up abusing the drug, compared to one-quarter of heroin users, one-sixth of cocaine or alcohol users and one-third of the people who use tobacco.

"So, in terms of its risk of abuse, (marijuana) is lower than a lot of the drugs that you have to schedule here," McSherry said. Last month, the pharmacy board rejected a petition to reclassify marijuana in Iowa. Following the public hearings, the board will make a recommendation to legislators about whether Iowa should legalize marijuana for medical purposes.

Doctor Edward Hertko, a retired physician from Des Moines, is among those pushing for the change. "Since 1979 and especially since the mid 1990s, there have been numerous studies that have shown that many patients suffering from AIDS, cancer, epilepsy, Lou Gehrig’s disease and other debilitating illnesses…(the studies) find that marijuana provides some relief from their symptoms," Hertko said.

Only one person spoke out against medical marijuana during the first two hours of today’s public hearing, which is scheduled to last until 7 p.m. Carl Olsen, with Iowans for Medical Marijuana, is hoping the board members take the testimony to heart.

"They should have done this 13 years ago," Olsen said of the public hearing. "They’re just playing catch up now and from what I heard today, it’s a slam dunk, they’re going to find marijuana has accepted medical use."

Dale Woolery, spokesman for the Governor’s Office of Drug Control Policy, is among those hoping the board will continue to back Iowa’s ban on medical marijuana.

Woolery says "the body of science to date does not support the premise" that marijuana is a safe enough drug for use as medicine. The three remaining public hearings are scheduled for September 2nd in Mason City, October 7th in Iowa City and November 4th in Council Bluffs.