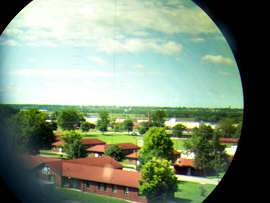 A new exhibit piece was added today at the Gold Star Military Museum at Camp Dodge that is 43-feet long and gives you a view for miles.

A construction crane lifted the submarine periscope to the top of the new addition of the Gold Star Museum, and guided it through a hole in the roof to a pedestal down below.

The periscope was donated by the U.S. Navy and came from a cold war era attack sub. Museum curator Mike Vogt says they’d been seeking something to represent Iowa’s submarine veterans.

Vogt says nothing is more emblematic of the submarine service than the periscope, so they contact the local organization of sub veterans known as the “Pachyderm Squadron.” The museum was turned down by the Navy in its first few requests for a periscope. 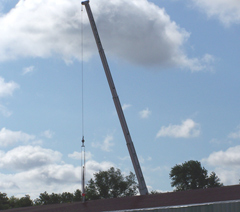 They kept searching an eventually hooked up with Paul Lipinski who used to work at the Kollmogen Electric Company of Rhode Island which manufactures periscopes.

Vogt says they were able to get a periscope donated, and it is now landlocked at Camp Dodge.

He says it’s the only operating Navy periscope that he’s aware of that’s on exhibit in the state of Iowa.

Once the expansion is completed, anyone can step up to the periscope eyepiece and pretend they’re in the midst of hunting for the Red October. While you’ll only be able to see the enemy sub in your mind’s eye — Vogt, says you will have a good view of Polk County from the top of the museum.

He expects the periscope to be a popular exhibit as they currently have a mock up of a four foot periscope in their old gallery, and kids line up to look into it. David Farran of Waverly served on a couple of subs, and is part of the state submarine veterans group. Farran says he’s excited his branch of the service will get the attention that’s often missing from the “silent service.”

Farran says: “Submarines just go out to sea and disappear and then they come back…it’s a branch that doesn’t get much recognition. World War Two would never have lasted long enough for us to do anything with it if it hadn’t been for our submarine force — because the rest of our navy was gone. We didn’t have a navy, it was essentially destroyed in Pearl Harbor.”

Farran was in the submarine service from 1960 to 1966, serving on the World War Two era USS Bream, and then on the nuclear sub USS Scamp. Farran says it was an enjoyable time. Farran says life on a nuclear submarine was a “very interesting” situation. He says you really don’t think about being under water and enjoy yourself.

Vogt says it’s anticipated the Gold Start Museum expansion will open in March of next year.