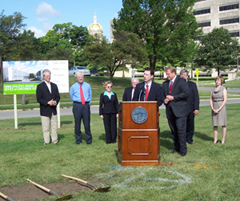 Shiny new shovels were used to break ground today for a new state building that will serve as offices for the Iowa Utilities Board and the Consumer Advocate. Officials expect the $9.8 million building to be finished in the fall of 2010.

Project architect Carey Nagle says the structure will use 63 percent less energy than a typical office building of the same size.  “The whole premise of the project was founded on energy efficiency,” Nagle says.

The sunscreens will be one of the largest architectural features of the building. “That sunscreen is designed to bounce that sunlight into the space but at the same blocking down the glare that can be detrimental and it lets you take on some of that passive heat gain of the winter but also block out the direct heat gain from the summer,” Nagle says. “You know, it’s a pretty simple strategy, but it’s very effective.” 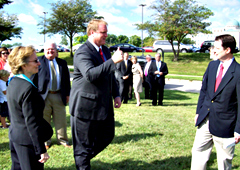 In addition, all the rain that falls on and around the building will be collected and reused to flush toilets and Nagle says that will dramatically reduce the water bill. “We have savings in that department in the order of 46 percent below a typical building,” Nagle says.

Governor Chet Culver spoke briefly before the ceremonial ground breaking at the construction site which is southeast of the statehouse.

“What a fitting location here on a very busy intersection, a lot of traffic, a lot of people going out to the State Fair every year that will see this beautiful, new, state-of-the-art building,” Culver said.

State officials sold bonds to raise the money for the building’s construction and those bonds are financed, ultimately, by Iowa utility customers. That’s because agencies like the Iowa Utilities Board are financed by fees charged to the utility companies it regulates. Chuck Seel, a spokesman for the Iowa Utilities Board, says the new building soon will be more cost-effective than renting office space.

“We’ve been in our current building since 1998 and we’ve paid over $7 million in rent, so over the long pull, this is a much better deal for everybody,” Seel says.

Utility customers have footed the bill for that rent, too.