You are here: Home / Recreation / Entertainment / House concerts bring singers to back yards 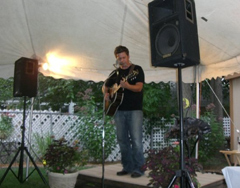 A new phenomenon in live music is growing in popularity in Iowa’s cities and rural areas. It’s called a "house concert," where you invite a group of friends to your home for a potluck dinner and a concert in the living room or back yard.

"People can come and get the stories behind the songs, it’s a lot more intimate and you can meet the artist," Elliott says.  "It’s a great way to just sit back and enjoy music and stories for an evening." Elliott says the audience goes to a house concert to hear the music without the distractions you’d get in a bar or a coffeehouse.

"In a coffeehouse setting, it’s pretty popular but still you’ve got the grinder going, you’ve got espressos being made and so you get all this background noise," Elliott says. "The house concert is set up to be that completely listening crowd." The host doesn’t have to spend a bundle, either. He says they only need to provide the venue, some chairs and a place to plug in the amplifier. The musician is paid by the people who are attending the private show.

"It’s a suggested donation so most people coming into it know, okay, I’m going to pay $10 or $15, and if you think about it, that’s really not much to pay for an evening’s entertainment," Elliott says. "This is set up to where the person hosting it doesn’t have any problems with the tax issues because it’s completely donations. All proceeds go to the artist."

For more about Elliott, visit " www.chadelliott.net " while information on house concerts can be found at: " www.concertsinyourhome.com ".