You are here: Home / Human Interest / Man turns periscopes that once rode warships into museum exhibits 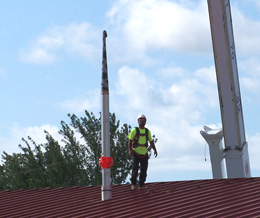 A man who once helped make periscopes for warships, now helps install the periscopes in museums so everyone can see how the devices work.

Paul Lapinski retired from the Kollmorgen Electric Company of Rhode Island, and by chance got into helping install periscopes in museums.

Lapinski estimates he’s installed some 25 periscopes in museums, with the latest Thursday in the new exhibit building at the Iowa Gold Star Museum at Camp Dodge. The periscope was built in 1964 and was once carried aboard a nuclear attack sub. 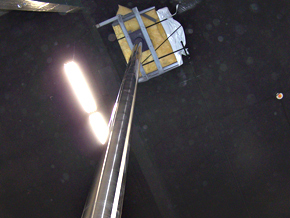 Lapinski says the whole periscope from top to bottom is about 43 feet, with the main tube being 40 feet.

The tube is made of one piece of stainless steel that is drilled out and the inside and outside are machined. The inside of the tube is full of lenses that send the images to the eyepiece down below.

Lapinski says this is one of two periscopes the subs carried, and it was used to find the range for torpedo attacks. He says you would find the height of the target ship and then you could then estimate the range to the target and set that into the target data computer. While the periscope at Camp Dodge won’t be used to sink ships, Lapinski is setting it up so visitors can look out over the surrounding area.

Lapinski says this periscope was state-of-the-art when it was built, and cost around $250,000, a bargain when compared to today’s subs. Lapinski says the new class of submarines, the Virginia class, doesn’t actually have a periscope, it has two photopic masts, and he says the last cost he heard for them was about 37-million dollars. Those masts are all electronic and digital.

Lapinski says Kollmorgen began making periscopes in 1916 and now is the only manufacturer left. He says for the last 20 years much of his work was with foreign navies who still used the periscopes with the glass lenses, while the U.S. had switched to digital.

The new exhibit area at the Gold Star Museum that includes the periscope is expected to open in March of 2010.