You are here: Home / Business / Boswell: "we need some kind of public option" 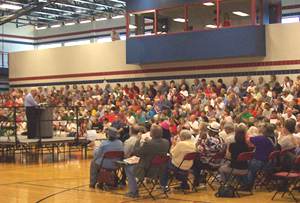 A crowd of more than 350 turned out for Congressman Leonard Boswell’s town hall meeting in Des Moines on Sunday afternoon and Boswell received a rousing response when he declared his support for a government-run health care plan that would compete with private insurance.

"I’ve come to the conclusion over these last several years that we need some kind of a public option," Boswell said, to applause and cheers — and a few jeers from others in the crowd who don’t share his opinion. "I also realize that it’s got to be constructed very carefully."

The crowd was decidedly pro-reform and many of the signs resembled Obama campaign placards. Iowa Farmers Union president Chris Peterson drew the afternoon’s loudest burst of applause when he touted the so-called "public option."

"I’ll trust my government any day over the C.E.O. of an insurance company," Peterson said.

But there were opponents in the crowd who criticized health care reform. Several raised fears about government "rationing" of care. One man said government was creeping "into every aspect of our lives." 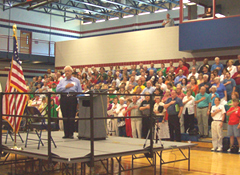 "Once the government has the health care of us, what don’t they have?" the man asked.

Boswell, a Democrat from Des Moines, fielded 21 questions over an hour and 15 minutes. You can listen to the entire forum by clicking on the audio link below.