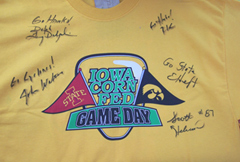 The Iowa Corn Growers Association and Iowa Corn Promotions Board have announced an agreement to sponsor the games between the two biggest state schools. Iowa State University athletic director, Jamie Pollard, talked about the agreement.

Pollard says the two groups have stepped up to a level where they will be the top sponsors in the Cy-Hawk series, including promotions before the football game and the basketball game between the two schools. Pollard says the sponsorship is a natural for the schools.

Pollard says, "It’s a tremendous industry for the state and it’s who both schools are when you look at who our fan base is, we’re Iowans, and that’s a big part of the Iowa culture and we need to embrace it." He says corn is much more to the corn industry than most people think, as it has multiple uses and he says it has been interesting to learn about that.

University of Iowa associate athletic director, Rick Klatt, echoed Pollard’s comments. "At it’s core Iowa is an agricultural state and always will be, it’s a wonderful thing for the University of Iowa and Iowa State University to have a formal relationship with the Iowa Corn Growers and promotions board," Klatt says. Klatt says the sports contests will help bring attention to the impact of corn on the entire country.

He says the program will hopefully educate Iowans and others about all the different uses of corn. Doug Elsbernd is the incoming president of the Iowa Corn Growers Association. Elsbernd says the Iowa, Iowa State rivalry is probably the premiere event in Iowa that reaches many people and he says Iowa corn growers have a lot to talk about and this seemed like a great partnership to do that.

Corn has been both blamed for higher food prices, and praised as an alternative fuel in recent years, and Elsbernd says this is another way to get information out on its benefits.

Elsbernd says the fuel versus food debater was a hot issue one year ago and the corn growers have been working through that. He says as they educate the public about the value of corn, the public has been very receptive to their messages. Elsbernd declined to say how much money the two corn organizations are putting into the effort. While the representatives of the two schools agree on the importance of corn, there is still a question over whether more corn growers support the Hawkeyes, or the Cyclones. Pollard, the I.S.U. athletic director, was confident it’s his school.

"I thought everybody leaned Cyclone," Pollard said. While Klatt suggests the find out in the fall as farmers are in the field and listening to the game. Klatt says he believes most of the farmers now have cell phones and maybe there should be a text message poll during one of the games. While Elsbrend, the new president of the corn growers, is staying neutral.

Elsbrend says it appears there are a lot of people in agriculture that are for Iowa and a lot for Iowa State. Elsbrend says if you want to attend the state ag school, you have to go to Iowa State, but he declined to guess which school has more supporters. The agreement was announced at the Iowa State Fair Friday.