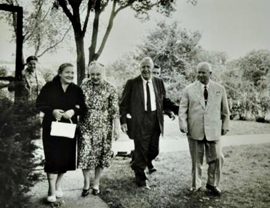 Nikita Krushchev visits the Garst farm.Soviet Premier Nikita Khrushchev never could have envisioned the impact his visit to Roswell Garst’s Iowa farm 50 years ago had — and is still having.

The town of Coon Rapids is holding a host of activities through the weekend, including a Khrushchev-Garst look-alike contest. Rachel Garst, Roswell’s granddaughter, is helping organize it all.

“We’re going to have a ceremony at the Garst farm which was just placed on the National Register of Historic Places,” Garst says. “In the afternoon, we’re going to have an agricultural progress parade.” Garst doesn’t remember any of the original visit as she was only one-year-old at the time, but visitors to the west-central Iowa community on Saturday will be treated to something of a repeat, in addition to seeing all sorts of agricultural advancements.“We have a major, major display of farm machinery, the most high-end, cutting-edge equipment,” Garst says. “We’ll have antique farm machinery displayed, an original play written for the occasion, with real dialogue between Khrushchev and Garst. And in the evening, we’ll have a beer garden put on by the Coon Rapids Fire Department.”

Garst says her grandfather was on the ground floor of the hybrid seed corn industry and the 1959 meeting helped bridge the political divide between the communist nation and the U.S. She notes they shared a common interest in food production at a time when both countries cared more about stockpiling nuclear weapons. Garst says the friendships that were forged five decades ago still live on today in many different forms.

“All types of Iowa-Russian relations sprang up all across the state,” Garst says. “There were banking exchanges, sister city programs. We have a sister state program with Stavropol, even our National Guard has an exchange with the national guard of Stavropol.

There’s a long history by now of friendship and most importantly, personal direct contact between the people of Russia and the people of Iowa.” More information on this weekend’s events.