You are here: Home / Politics / Govt / A “Draft Branstad” movement is underway 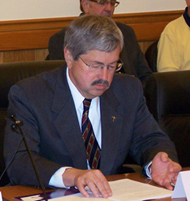 Former southeast Iowa Representative Sandy Greiner of Keota is leading what she calls “our effort” to get Branstad to leave his job as president of Des Moines University and hit the campaign trail again.

“I want to know how much support there is for him out there and this seemed to be a way to do it,” she says.

“He’s just what I think we need,” Greiner says. “He’s been through the fire several times and come out on the other side successful.”

Greiner was elected to the legislature in 1992, representing a district that included Eddyville which she says Branstad helped recover from the Floods of 1993.

“He just did an incredibly remarkable job dealing with that crisis and Iowa is in a crisis right now,” Greiner says. “It’s a different kind of a crisis, not discounting the problems we have with not getting our flood related issues resolved, but we’re dealing with a financial crisis. (Branstad) has been through that, too.”

Greiner insists she has not met with Branstad, but she also suggests Branstad knows about the “draft” effort was being launched today.

“I have not sat down and talked with the governor about this at all. He knew,” Greiner says. “I had no discussions with him, just decided it was time to find out what kind of support (Branstad) has. I think it’s huge.”

Greiner also says she has “had no discussions” with former Branstad aide Doug Gross, the 2002 Republican nominee for governor who has been encouraging Branstad to run in 2010. Greiner says she’s not talked with former Branstad law partner Richard Schwarm either. Schwarm, the former chairman of the Republican Party of Iowa, is part of a group called the “Iowa First Foundation” which has financed polls that show Branstad favored in a match-up with Democratic Governor Chet Culver.