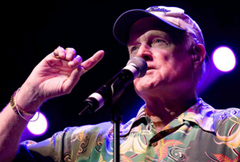 The Beach Boys will play their first-ever concert in Fairfield today but one of the men who founded the legendary band in 1961 says he’s been visiting the southeast Iowa community for decades.

Mike Love learned transcendental meditation in 1967 and says he steals away to Fairfield frequently for R-and-R, that’s rest and relaxation, not rock ‘n’ roll. The singer and songwriter says the community facility, known as the Raj, offers health treatments which he believes have helped prolong and greatly improve his life.

“Ayurveda is an ancient science of health from India,” Love says. “It has all kinds of aspects to it but they have fantastic treatments that reverse the clock biologically speaking, in other words, you can reverse the aging process through a combination of meditation and the Ayurveda, so it’s been really helpful to me.”

Love is 68 years old but when he inputs his vital information before a treadmill workout, he says he usually punches in 50, as that’s how young he says T-M allows him to feel. “It’s been really helpful to me to be able to meditate and get these treatments occasionally because the schedule we keep is pretty intense,” Love says, laughing. “We haven’t had a summer off in 47 years.” He says transendental meditation helped prevent him from falling into the same traps that have caught and killed many other celebrities.

“That has helped me to stay away from too much drinking, I don’t smoke, all the lifestyle choices that can lead to disease and early death, I’m not interested in that path,” Love says. “I’ve seen plenty people go that way and it’s a drag because I’m sitting there thinking, gee, if they could only learn this technique and benefit by it, it’d be great.”

The concert will be held in the open fields beside Fairfield Middle School. The gates open at noon. For tickets, directions and parking information, call 641-472-2787.