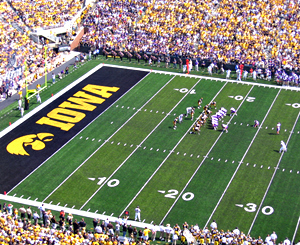 UNI lines up for a field goal against Iowa.The Iowa Hawkeyes have been established as a 7 point favorite for Saturday’s 57th meeting with Iowa State even though the home team has won the last five games in the series.

The Hawks escaped in their opener against UNI with a 17-16 win in a bizzare ending that saw them block two fieldgoals in the final seven seconds.

The panthers recovered the first try behind the line of scrimmage and got another attempt.

Iowa coach Kirk Ferentz says UNI outplayed his team in most phases of the game. He says his team made too many mistakes and UNI took advantage of it. The Panthers outworked and outgained the Hawkeyes and nearly came away with their first win in the series since 1898.

The Panthers will open their home schedule on Saturday against South Dakota.