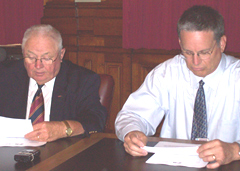 The Senate Ethics Committee has dismissed a complaint against a lobbying group that was five months late in filing a disclosure report about its pricey party for legislators.

The group’s tardiness came to light as the Iowa Pharmacy Association’s legislative reception was the same February night that State Representative Kerry Burt of Waterloo was arrested and charged with drunken driving.

The Senate Ethics Committee today voted five-to-zero to dismiss the complaint about the tardy report since the Pharmacy Association had finally filed its report about their $3000 party in February. Senate President Jack Kibbie, a Democrat from Emmetsburg, says lawmakers will consider streamlining the process for disclosing the details of such legislative receptions next year when the 2010 legislative session convenes.

"This would mean that we could move to a paperless system with more transparency and accountability," Kibbie says.

If the committee had found the Iowa Pharmacy Board in the wrong, there is no fine, but the ethics panel could have issued a letter of reprimand. Kibbie says legislators will consider changes that would provide "greater sanctions" for failing to follow the rules.

"We want 100 percent transparency on any dealings with the legislature as far as the lobby is concerned," Kibbie says.

Iowa Citizens for Community Improvement filed the complaint. The group’s Adam Mason says they expected today’s action, but are hoping they’ve gotten lawmakers’ attention about the larger issue: giving the Ethics and Campaign Disclosure Board authority to oversee the reports lobbying groups must file about the receptions they throw for legislators.

"What we’ve seen in the years since the legislature moved to retain that authority solely is that they have been unable or unwilling to file up if reports are filed late, or even if reports are not filed," Mason says.

Before 2005, the Iowa Ethics Board could issue letters of reprimand or even fines against lobbying groups that failed to file the proper paperwork after legislative receptions. The state’s "Gift Law" forbids lobbyists from buying an individual legislator food and drink that’s worth $3 or more. But groups often invite all 150 legislators to a reception, meaning the party budget expands.  Since 2005, legislators – through the House and Senate Ethics Committees — have had sole oversight of such spending.

"The larger concern to Iowans should be why special interest groups are wining and dining our legislators," Mason says. "CCI members and other Iowans across the state are sick and tired of special-interest big-time lobbyists buying and gaining influence to lawmakers and when this is happening we need to be assured we know how much is being spent, when this is happening, where it’s happening and who has been there."

Iowa Citizens for Community Improvement wants the Iowa Ethics and Campaign Disclosure Board to regain oversight authority. Mason says in 2009 alone, at least 26 of the 90 reports lobbying groups filed to disclose legislative receptions were filed late — and Mason says that’s because many legislators aren’t interested in getting tough with lobbying groups.

"Our members have known it for a long time — it’s like the fox guarding the hen house," Mason says. "…The issue is larger than just the Pharmacy Association filing a late report."

Mason says "full transparency" of what lobbying groups are spending to influence legislators is just the "first step" to remove "special interest influence from our political system."