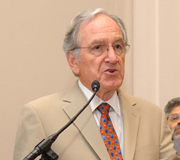 Iowa Senator Tom Harkin is trying to downplay concerns Iowa’s agri-business interests will be losing some of their clout as Harkin resigns his chairmanship of the powerful Senate Agriculture Committee. The new chair is Senator Blanche Lincoln of Arkansas. Harkin, a Democrat, says Iowa’s ethanol producers in particular shouldn’t worry about the panel’s shift in power.

“Listen, I’m still going to be on the Ag Committee,” Harkin says. “I will still be the second ranking, (Vermont Senator) Pat Leahy is actually the highest ranking and then I’m right after him so I’m still going to have a key position on the Agriculture Committee, and Senator Grassley’s on the Republican side, so you’ve got two of us there and there are enough of us from the upper Midwest, strong supporters of ethanol and biofuels, that I don’t think we have anything to fear there. We’ll be fine.”

Harkin resigned as Ag Committee chairman on Wednesday as he was named chairman of the “HELP” panel, the Health, Education, Labor and Pensions Committee. Senators are only allowed to chair one panel at a time. Harkin replaces the late Senator Ted Kennedy as chair of the HELP Committee, which is spearheading the Senate’s effort to reform health care.

Harkin says, “I find this a great honor and a great challenge but also full of great opportunities to make some needed changes and get our country moving forward not only in health care but in education, securing pensions and retirement for people, food safety and a host of other things that we’ve got to do to move America into the 21st century.”

Harkin was appointed to the House Ag Committee when he was first elected to congress in 1974. When he won a Senate seat in 1984, he became a member of the Senate Ag Committee and served as chairman when the panel wrote the 2002 and 2007 Farm Bills.