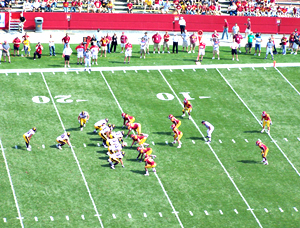 Iowa on offense against Iowa State.

Iowa State scored first with a field goal, but then Iowa ran off 35 unanswered points and downed the Cyclones 35-3 in the annual football showdown in Ames.

The Hawkeyes defense picked off five Cyclones passes and forced a fumble to set of their offense. Iowa coach Kirk Ferentz says that was a key. He says he’s thrilled to get the victory and the turnovers by the defense were key.

He says they improved, but still have a lot of work to go, but the improvement was something good to see. Iowa has trouble winning in Ames in the last few years, but Ferentz says he doesn’t pay attention to that, he’s just concerned with improving and getting a win. “It just means we’re 2-0 now and I don’t mind tell you last Saturday about three o’clock I was a little worried about where we were going to be today at this time,” Ferentz says.

Iowa State coach Paul Rhoads says his team made too many mistakes to have a chance to win. Rhoads says he was asked early in the week the key to the game and he says he told them the team with the fewest turnovers would win. “We executed poorly through the course of the football game, you can’t win football games doing that, and too many penalties,” Rhoads says. Iowa State tried an on-side kick after scoring the field goal to take the lead, but Iowa recovered the kick and took just four plays to go 41 yards and score a touchdown. Rhoads says it was a play they had talked about all week.

Rhoads says: “There’s a right time and a wrong time, whether you are successful or not, to run those types of plays and that was the right time to run it. We had just driven down the field and scored, gotten a field goal, and their defensive front was tired, physically tired. There was some holes in their kickoff coverage team that we knew we could take advantage of.” Rhoads says they simply didn’t execute the play properly. Cyclone quarterback Austin Arnaud threw four interceptions, and Rhoads says that will not change his status for next week.

Rhoads says Arnaud had a “very poor day” and nobody in the state of Iowa feels worse about the game than Arnaud. He says Arnaud will be the starting quarterback tomorrow and will come back and work harder. Backup quarterback Jerome Tiller came into the game in relief of Arnaud and also threw an interception. Brent Greenwood had two of the picks for the Hawkeyes, and Tyler Sash has three.

Greenwood says they were anticipating the opportunity to pick off some passes. He says the came into the game and had noticed that Arnaud stares at his receivers and they were able to take advantage of it. Iowa has kept the Cyclones out of the endzone for 14 quarters. Greenwood says it’s great whenever they can keep a team out of the endzone and says the Cyclones are a good offensive team, so it helps out the team when the defense can shut them down. Iowa quarterback Ricki Stanzi threw two interceptions, but says the defense did a great job of keeping them in the game.

Stanzi says the defense definitely gets the game ball as they got the turnovers and gave the offense a short field to put points on the board. Stanzi talked about winning the in-state matchup.

Stanzi says it’s a road win against a good team in a hostile environment, and he says they knew it would take some time to adjust to the crowd. He says the defense did the job and if they don’t play like they did, then it would have been a totally different game. Iowa State falls to 1-1 and will go on the road to face Kent State on Saturday. Iowa moves to 2-0 and hosts Arizona next Saturday.