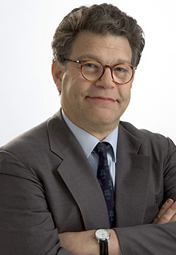 “This year we have a chance to confront the single biggest threat to America’s future and the greatest unmet moral obligation in our history all rolled into one. That’s what health care is. This is our opportunity,” Franken says.

Franken says the debate on health care needs to change, after an angry summer of town meetings. Franken says: “We don’t want to look back and say we squandered this opportunity because we allowed ourselves to be shouted down. Or that we voted for change, and then got scared of actual change.” Franken. The event came just days after Harkin, a Democrat, assumed the chairmanship of the powerful Health, Education, Labor and Pension Committee.

“Or I don’t know people who work,” Franken said to more laughs, “or who may even want to retire some day. You know, with a pension. I suppose those people might care about the work of the health, labor, education and pension commitee.” Franken also made fun of Harkin’s hosting a steak fry after becoming chairman of the committee. “Now of course one way nutritionists tell us that we could prevent disease…is if we ate less charcoaled, grilled, marbled, red meat. So please let me be the first to invite you to the first annual Tom Harkin tofu scheme.

The steak fry is one of the biggest Democrat fundraisers held every year.