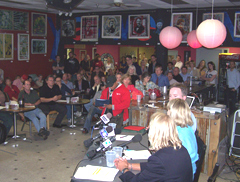 Members of the Iowa Motion Picture Association (IMPA) are calling on Governor Culver to reinstate a tax credit program for films shot in Iowa. The program was suspended on Friday after an internal audit by the Iowa Department of Economic Development (IDED) found the program lacked proper oversight of expenses.

Mike Tramontina resigned as director of the agency, while Iowa Film Office director Tom Wheeler was fired this afternoon. Bruce Heppner Elgin, vice-president of the IMPA Board of Directors, says the tax credit program should be fixed and put back in place as soon as possible. Elgin, who runs his own film production company, says the tax credit has provided a big boost to the state’s economy.

“We have spent hundreds of thousands of dollars in Iowa communities and that’s on top of wages,” Elgin said. “With so many Iowans being hired, that money is going directly back into the Iowa economy as the spend right here at home.” Culver has said he is willing to meet with filmmakers soon to discuss projects that have already received commitments for tax credits.

IMPA Board Member Ann Wilkinson, who runs a casting company in Iowa, says those active projects will likely keep filming. But, she’s worried filmmakers that had planned to shoot their projects in Iowa will now look elsewhere. “I think we can say that it has put the brakes on some developing projects,” Wilkinson said. “I have spoken with several producers who were intending to come (to Iowa) and shoot, but are now waiting to see what the fallout is on the answer here.” Elgin says Wheeler, who was the only employee of the Iowa Film Office, was taking on too much work.

“We believe that the Iowa Film Office was understaffed and under-supported from the very beginning of the tax credit,” Elgin said. “The IMPA has worked to try and get more funding, more support and more staff power for the Iowa Film Office.” In addition to Wheeler’s dismissal, the Governor accepted the resignation of IDED Deputy Director Vince Lintz. There are currently four films being shot in Iowa, three in Des Moines and one in Council Bluffs, that are due tax credits. The state program has paid out 32-million dollars in tax credits to 22 movie productions in the past two years.