You are here: Home / Politics / Govt / Culver: “Iowans will not be taken for suckers.” 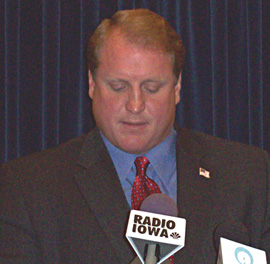 Governor Chet Culver says he is “outraged” that “some” movie companies have taken advantage of a state program designed to lure the film industry to Iowa.

“Iowans will not be taken for suckers,” Culver says.  “While we need to make changes to strengthen management of this program, we are not going to be taken advantage of and, if we are, we are going to claw back and make sure any money wrongfully provided is returned to the state taxpayers.”

On Friday Culver suspended the state tax credit program for movie productions and on Monday Culver fired the Film Office manager. During a news conference this morning in Cedar Rapids, Culver read a written statement to reporters.

“We need to make sure that the film and TV productions in our state are following the rules and following the laws.  For example, projects must have commitments of at least 50 percent of their funding before even applying for assistance under the program,” Culver said. “In addition, projects are not to receive tax credits until their after their work is complete and they have submitted receipts of qualified expenses.”

Culver went on to chide film makers who blame the governor’s freeze on the state tax credit program for payroll problems.

“We expect film and television producers to obey Iowa’s labor laws which means people get paid for the work that they do when they do it,” Culver said.  “That does not mean they wait until after their tax credit has been approved.”

According to Culver, his staff has “reached out” to a number of film makers who have productions in Iowa right now and will — “on a case-by-case basis” — review the problems those film makers cite, but Culver is far from ready to restart the film tax credits.

“The actions I have taken are to protect the best interests of Iowans, not to harm an industry,” Culver said, reading from his written statement.  “I hope we move forward, but before we do we must assure that the film program has the oversight in place to assure that it operates properly and as intended.”

A reporter asked Culver why that “oversight” hadn’t been in place before.  “That is a very fair question which had led to three people being removed from the Department of Economic Development and we’re going to get to the bottom of precisely why those steps weren’t taken to protect the taxpayers which is why I’m so outraged and upset that we have uncovered this,” Culver said.

Culver refused to say more about the exit of Tramontina and promised “no delay” in other activities in the Department of Economic Development, such as federal block grant money destined for flood recovery projects in Cedar Rapids.

“We will name an interim director and we will not skip a beat,” Culver told reporters.  “…If anything, we’ll be more efficient, more effective and we’ll be able to make sure that Iowa continues to move forward with economic development efforts with the new team at the department.”

This afternoon Culver’s staff announced Fred Hubbell, a retired Des Moines insurance executive, is the interim director of the Department of Economic Development.  Joe O’Hern, a long-time parliamentary officer in the Iowa House of Representatives who went on to work in the federal government, is the new deputy director of the agency.

Culver met with a top FEMA administrator this morning and toured areas of Cedar Rapids that were hit by flooding last summer.