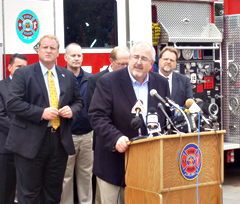 The director of the Federal Emergency Management Agency says there’s still a lot to do before Cedar Rapids makes a full recovery from last year’s flood. FEMA Director Craig Fugate along with city, state, and other federal officials, toured the flooded Time Check neighborhood in northwest Cedar Rapids.

Fugate says FEMA is largely finished managing the response. He says the hard work now is to rebuild, and rebuild in a way that is right and better so future floods have less of an impact. Fugate took control of the agency in May. He previously served as director of Florida’s Division of Emergency Management. He says they will continue working with the state to help with the recovery.

Fugate says they want to rebuild in a way to minimize future disasters. Fugate says it makes sense for some people to move out of flood zones but acknowledges it’s not an easy decision. Fugate says: “To make that decision to leave that home and move somewhere else, that’s a hard thing. I mean this is the neighborhood you grew up in, this is where the babies were born, this is where the birthday parties were, this is where the kids graduated from high school, this is all the things that a family has in that home and they’re going to make the decision that because they flooded, they flooded again, it’s time to move.”

Fugate offered little in the way of specifics however he did say Cedar Rapids is doing a good job recovering.