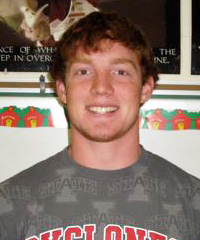 Connor Lange is a senior at Lenox Community Schools. He was nominated by Principal Ken Myers, who says:

“Connor carries a 3.62 GPA and is a major player in football, basketball, and baseball. The 2008 football team won the State Championship and he played a key role. Also the 2009 Baseball team finished runners-up and he again played a key role. He is the starting center on the basketball team. His GPA has him leading his class and he is a member of the National Honor Society.”