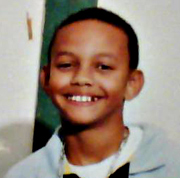 Des Moines police say they’ve found the vehicle they believe was involved in a hit-and-run accident that killed one teenager and injured two others. No charges have been filed.

It happened late Saturday night. When cops arrived shortly before midnight, two teenagers were lying in the street. Thirteen-year-old Devin Donald Fry was taken to a hospital for surgery, but he died Sunday morning.

A seventeen-year-old girl was critically injured, but police say she is “expected to survive.” Another 15-year-old boy was hit, too, but he suffered only minor injuries. The S.U.V. was going west on a major city street when it hit the three teens who were walking across the street.

A reward of up to a thousand dollars is being offered for tips that lead to the arrest of the driver involved.