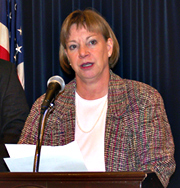 Both of the victims were adult males who lived in eastern Iowa and Quinlisk says that had some factors that would put them at a higher risk for the virus. The Health Department does not release the names of the victims due to confidentiality laws. Doctor Quinlisk says the seasonal flu is still among the top causes of death in Iowa every year, but the H-1-N-1 strain varies from the norm.

Quinlisk says usually with seasonal flu the elderly and those with serious medical problems are at the highest risk, but with the H-1-N-1, other age groups, such as children and young adults are also at risk of getting seriously ill and possibly dying. Quinlisk says staying healthy is the best way right now to combat any type of flu.

Quinlisk says you should continue to follow the three C’s which are: clean your hands frequently; cover your coughs and sneezes with a tissue or your sleeve; contain germs by staying home when you are ill. She says you should also get a season flu shot, as they expect the season flu to come in. Quinlisk says the shot for the H-1-N-1virus will be available in the next several weeks. Quinlisk says getting a seasonal flu shot won’t keep you from getting H-1-N-1, but it may be some help.

Quinlisk says there is a correlation between the two flus, but it is not direct. “In other words if you get the seasonal flu it’s not something the means that somehow your immune system would make you more susceptible to H-1-N-1 necessarily,” Quinlisk says,

“but we do know that the healthier you stay and that the better in health that your respiratory track stays, the better you’re going to be in fighting off influenza and other respiratory viruses. So, if you get the regular flu it might well put you at a slightly higher risk of getting any respiratory virus that might come along, including H-1-N-1.”

For more information about season flu and H-1-N-1, visit the Iowa Department of Public Health’s website.