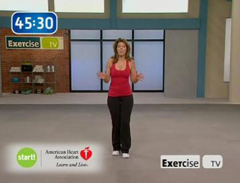 A new study touts the benefits of workplace wellness programs, singling out several Iowa companies for creating opportunities for employees to get active. It starts with exercise classes, but American Heart Association researcher Mercedes Carnethon says worksite wellness programs can include a host of elements.

Carnethon says, “The most frequent components are: tobacco cessation and prevention, regular physical activity, stress management and reduction, early detection and screening for heart disease and stroke risk factors, nutrition education and weight management.” She says more Iowa companies are seeing the positive impact wellness programs can have on their employees — and on the bottom line.

“Healthier employees are more productive,” Carnethon says. “Absenteeism is decreased. Presenteeism — the dreaded situation where the sick employee comes to work and spreads their illness to everybody — presenteeism goes down as well and so there are substantial cost savings from a productivity standpoint.” The study found heart disease costs the nation’s businesses 24-billion dollars a year in lost productivity. Carnethon says wellness programs can attract exceptional employees while enhancing productivity and morale.

“For every dollar spent on health and wellness, companies can save between three and 15-dollars,” Carnethon says. “Those savings are evident fairly immediately within 12 to 18 months of implementing a program.” She says several Iowa companies are mentioned in the report, including Meredith Corporation in Des Moines, ConAgra Foods in Omaha/Council Bluffs and U.S. Bank in Clinton.

Square-D by Schneider Electric, in Cedar Rapids, has increased employee participation in wellness programs by 12% through offering more programs. Carnethon says, “In general, when you get a critical mass involved, more people join in because they see the benefits.” She also offers credit to Trane/Ingersoll Rand in Davenport for its efforts.

“They allow their workers to wear athletic shoes on Fridays to encourage walking and moving around and they also created an indoor walking path for people to get involved and be active right there in the workplace,” Carnethon says. “For those who prefer to exercise in the evenings and weekends, they offer discounts to a local YMCA.”