You are here: Home / Human Interest / Maya Angelou will appear at Drake, is not dead 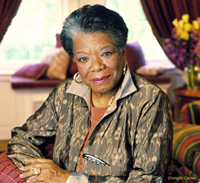 Famed poet and author Maya Angelou is finding herself quoting Mark Twain, in that the rumors of her death are “greatly exaggerated.”   Matt Kelley report on Maya Angelou :40 MP3

The 81-year-old Angelou had to cancel a recent talk because she was feeling ill, but somehow, word spread on the Internet she’d died. It was a shock to Sue McEntee at Drake University, who’s organizing Angelou’s trip to Des Moines for this week’s lecture. McEntee says the Information Superhighway is a two-way street.

“She was feeling a little bit under the weather but she is doing very well and today should be on her way to New York for an event and then she’ll leave New York and come back this way, to Iowa, for Thursday evening,” McEntee says. “She is alive, she’s well.” McEntee says they’re expecting a large crowd for Angelou’s Thursday night lecture in Des Moines with several shuttle buses hauling in students and guests from a number of area schools.

“It begins at 7 P.M. at the Drake Knapp Center on the north side of our campus,” she says. “It is free and open to the public. The doors will open at 5:30 P.M. We are anticipating 8,000 people for this lecture so if you can carpool or take the shuttle bus, I think it’s going to make their trip to Drake much more enjoyable.” For more on the lecture, visit: “www.drake.edu/bucksbaum“.